Gerald Jacksonhttps://www.thencbeat.com
Hi, my name is Gerald Jackson and I am 24-years-old. I was born and raised in Troy, Alabama. I currently reside in North Carolina. I am a Journalist, Influencer, Content Creator, and a Man of Faith! I have been blogging for 4 years and I love it! I don't shy away from the truth, always speak my mind, and before I take anything back, I'll add more to it. Follow me on my social media below to keep up with my personal life. LOL!
FacebookTweetPinEmailPrintLinkedInShares1.3k

Follow me on Twitter@GeraldJBlessed, Instagram @ImGJTheCEO, and if you have a story, please send it to newstip@thencbeat.com.

The church is becoming a freak house, and instead of the people of God going down in baptism water, they are going down in NUT and SKEET and coming up with that CLAP…

I am taking you to Durham, North Carolina, where one bishop is being called an “Enemy To The Cross” after he was caught sending nudity photos to another bishop’s wife, but that bishop’s wife also sent a picture back.

We don’t know how long Bishop Kersey and Evangelist Kersey have been married, but we do know that they have been separated for months and can tell you that the marriage is fake, and the vows were not real on either side. And we say that because although Evangelist Kersey has been caught cheating on her husband, a man who wishes to remain anonymous came forward and said he slept with her husband.

Back to Bishop Rudolph…

While Bishop Rudolph is not married, he is in a relationship with his soon-to-be wife, Jasmine Daniels. Now, Daniels may not want to marry Bishop Rudolph after this, but who knows? Some women can see all the RED FLAGS and still ignore the signs.

In these messages, you can see what appears to be Bishop Rudolph sending Bishop Charles Kersey’s wife, Evangelist Towanna, a photo of him with his shirt off and his underwear down covering his genitalia area. 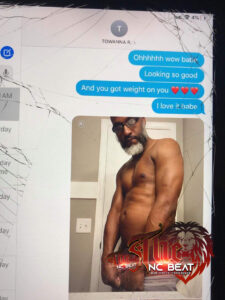 In the next photo, it appears that Bishop Rudolph allegedly sends Evangelist Towanna a pic of him hung and with his meat laying on the sink. Chile. 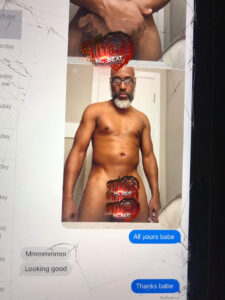 Big thighs, deep pussy Towanna then sends a photo of her looking like she wants to be folded up like a chicken wang by Bishop Rudolph, saying her “Pussy is wet come take a dive.” 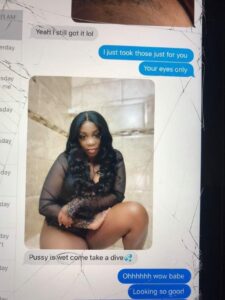 Whew Chileeeeee. So, Bishop Rudolph’s baby mama Jasmine Daniels had a lot to say in a Facebook post and a video she did about her baby daddy alleging that he threatened to kick her door in, beat her, and she even claims he raped a child.

In 2006, we found that in Jackson, Mississippi, Bishop Rudolph was accused of gratification of lust involving a child he is related to.

In her video, Daniels said that she is warning any woman who is dealing with Bishop Rudolph to leave him alone and also accused him of raping an underage girl in the graveyard at a church that belonged to his family in Alabama.

The video, however, shows a hurt woman trying to warn others not to deal with Bishop Rudolph because he broke her heart, which is understandable. But some of the things said in the video contradicts Daniel’s relationship with Bishop Rudolph. I say that because if you knew all of these things about him, why were you getting ready to marry him? 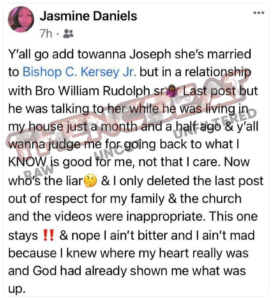 In a now-deleted post and video, Apostle Orion Denmond, of Odessa, Texas says he is now Apostle Charles Kersey’s leader and overseer, and that he must “deal with this.”

WATCH THE VIDEO BELOW (Make sure you take a shot every time you hear “deal with this” or “this” because you will be drunker than a cooter brown, LOL!):

We asked Apostle Denmond what gives him the authority to call someone an “Enemy To The Cross” and he said:

As Apostle of the faith and Archbishop, it is my consecrated responsibility to be the defender of the faith. Furthermore, I have a responsibility to cry out loud and spare not. Anything or anybody who goes directly against the word knowingly is an enemy of the cross. Number one he has no paper word in either the Bishopric and Apostleship, Number two even he was a Bishop we have cannon law that we ALL have to abide by as episcopates and Number three you and I both know that the problem in the church nobody is speaking out I WILL BE THAT ONE.

We also asked Apostle Denmond how being called an “Enemy To The Cross” will affect Bishop Rudolph and he said:

Being labeled an enemy of the cross is like what the great late Archbishop Ellis is did to Carlton Person. It basically marks you as a unbeliever among believers. Furthermore let me add there could be a tribunal scheduled for him to clear his name or the charges will stand among the body. But the tribunal will be up to him weather he want to go through with it or not.

You can read Apostle Denmond’s “Enemy To The Cross” proclamation against Bishop Rudolph below: 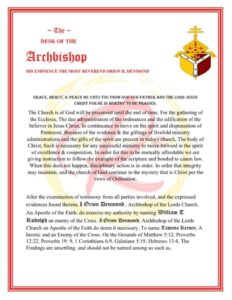 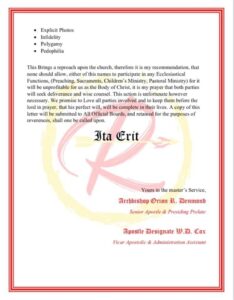 The North Carolina Beat reached out to Jasmine Daniels, Bishop Charles Kersey, Evangelist Kersey and did not receive an immediate response.

All of this mess going on in the church needs to stop, but when some of you all start getting taken out of here like God took Bishop Eddie Long Nuts out, you’ll begin acting right.

Chile the fantasy bishop letter has me hollering. These are satan’s “raggely” kids running around playing Catholic Church house. I can’t! Everyone involved is an enemy to the Cross. Flee this false church and run to The Word of God!

I ordained Charles Kersey as an Elder and installed him as a Pastor in 2015. A year later, in 2016, I terminated him and revoked his credentials, due to his questionable character, that I was unaware of, and because he wanted me to make him A Bishop, and I wouldn’t, and he went behind my back, and was made a Bishop by someone else. I did my best to stop him from making a shipwreck, but he wouldn’t listen, nor take correction, nor instruction. All of this is well documented. None of them are fit to lead God’s People. You can… Read more »

see why you had to go putting his business in the streets further. Being a man of the pulpit you should know discretion.

It’s all public information. A basic google search of his name is all that’s needed. You won’t find any scandals on my name. These whoring preachers have to be held accountable. A Bishop must be approve reproach. I am sorry my name ever got entangled with Charles Kersey or Towanna Kersey. I’m not a jack leg preacher. I’m the real deal, and I’m not covering up anybody’s sins. They need to come clean and live right.None of us are exempt, and ain’t nobody gonna get by. I tried to stop Kersey from being a Bishop, because he’s not fit, and… Read more »

Wow if she wants to save the world then help l ees and the world to jesus. This is not a warning it’s more of slander, stalking, opinionated allegations, and communicating threats.. this is sad.. if any of this is true then yes he needs help.. not exposure of his troubled past.. I’m praying for this woman right here and I’m praying for him.. I’m also praying for the minister that said he was the enemy of the cross.. and the comment that Rudolph wasnt fit to lead God’s people.. smh.. wow the judgement is sick and sad .. the… Read more »

Revelation is unfolding. As we witness this none of our opinions matter because the judge will presided over this case.

A North Carolina sheriff says the investigation against him after he wrecked his patrol car and did not report it to the police is...
Read more

A North Carolina sheriff is under criminal investigation after he wrecked his county-issued patrol car and did not report it to police; instead, he...
Read more
0 0 vote
Article Rating

ABOUT US
Your source for RAW, UNCUT, and Unfiltered News in North Carolina.
Contact us: newstip@thencbeat.com
FOLLOW US
© 2020 The North Carolina Beat, LLC. All Rights Reserved
wpDiscuz
7
0
Would love your thoughts, please comment.x
()
x
| Reply
MORE STORIES