Outside of North Carolina
Updated: March 7, 2021

Mother says white students made her 13 yr old son drink urine during sleepover, assaulted him too

Gerald Jacksonhttps://www.thencbeat.com
Hi, my name is Gerald Jackson and I am 24-years-old. I was born and raised in Troy, Alabama. I currently reside in North Carolina. I am a Journalist, Influencer, Content Creator, and a Man of Faith! I have been blogging for 4 years and I love it! I don't shy away from the truth, always speak my mind, and before I take anything back, I'll add more to it. Follow me on my social media below to keep up with my personal life. LOL!
FacebookTweetPinEmailPrintLinkedInShares91

Whew! This the kind of shit that makes you want to go bizarre on a muthafucka! Periodt!

In Plano, Texas, a black mother said she is outraged after her 13-year-old son was bullied, humiliated, and assaulted during a sleepover.

Students from a predominantly-white middle school in Texas invited SeMarion Humphrey to a sleepover last month when his mother claimed that her son was offered the invitation for the sole purpose of bullying him. 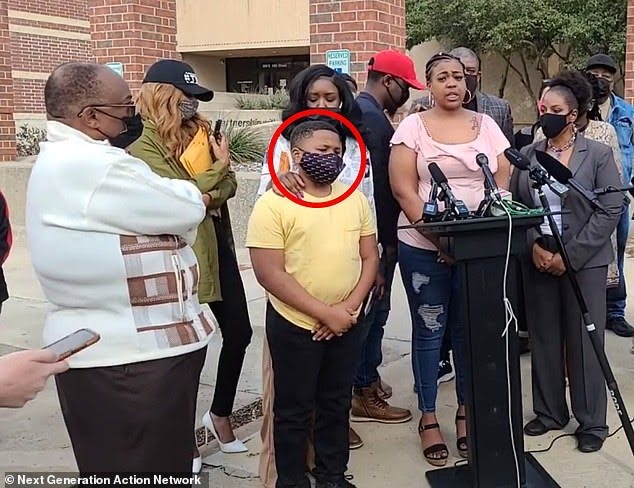 Humphrey had been continuously the target of bullying and abuse at his school, Haggard Middle School. When Summer Smith informed administrators of the abuse her son had been receiving, they brushed her off, saying, “Boys will be boys.” The Plano Independent School District maintained they do not tolerate bullying policy but was a slug on the assault of Humphrey at a slumber party.

On March 5, the community protested at the Plano Police Department, which seems to have got the attention of the authorities.

Plano ISD could not release confidential student information; they did say that they took “appropriate measures were promptly taken to protect the victim and investigate the allegations.”

In a video, the children could be seen smacking Humphrey and making him drink urine. The terrorists could be heard laughing. Smith also says her son was shot with a BB gun and called the n-word.

The incident is currently under investigation.

One-year-old fighting for his life after being shot by Houston police, partial skull had to be removed

The police should have called off the chase on this one. Now, because they didn't, a one-year-old is in ICU with problems breathing and...
Read more

A man has been arrested in Indianapolis after killing four of his baby mama family members because she would not give him half of...
Read more

GRAPHIC: Nashville woman killed by police officer after she shot the officer first, BLM is mad

Bodycam footage shows a Nashville officer exchange gunfire with a woman named Nika N. Holbert. Both were struck -- the officer is injured, and...
Read more

In Valdosta, Georgia, the Lowndes County sheriff said his office is reopening the case of Kendrick Johnson, who was found dead inside a rolled-up...
Read more
0 0 vote
Article Rating