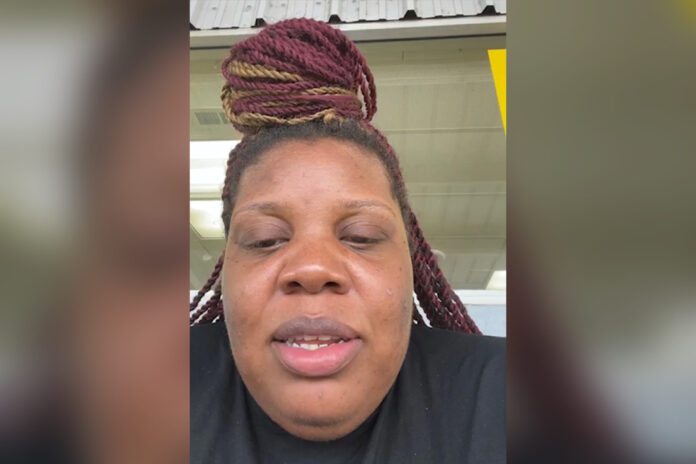 Word At The Repo Office, Sunday’s Best season 9 loser Tiffany Andrews is out here in these North Carolina streets living poor off her voice, eating peanuts for dinner, and acting like Felisha from the movie, “Friday.”

The need-to-retire gospel singer can’t keep her nose clean…it must be the 8ball sometimes then, huh? Tiffany can’t keep up a good relationship with her daughter Tatiyana Shari (Watch Larry Reid Live Interview With Tatiyana Shari About That) and neither can she afford to call Safelite AutoGlass to get a new back window in her raggedy ass Lexus truck.

Over the weekend, The North Carolina Beat learned through a submitted tip about an incident with Tiffany Andrews at Johnson Lexus in Durham, North Carolina.

The source said that Tiffany Andrews had issues with her Lexus truck and took it to the Johnson Lexus dealership, where they gave her a loaner vehicle until they fixed whatever was wrong with her car. According to the source, Tiffany had the car for about two months before it got repossessed by the dealership. The dealership repossessed the vehicle from Tiffany’s home, Extended Stay America hotel. The tracking device on the car showed that she went over her mileage and took the car out of state to places like Florida and New York which she wasn’t supposed to do.

In the photo below of Tiffany Andrews, if you look at the back window, it reads “Johnson Lexus.”

Tiffany called the dealership and told them the car was stolen and that she was about to file a police report. The dealership told Tiffany that they had repossessed the car.

According to the source, Tiffany Andrews called an uber to pick her up and take her to the dealership to try and sort out the issues.

Tiffany arrived at the dealership and had to pay $2,000 for damages done to the vehicle while in her possession. The loaner vehicle was said to have had damages done to the grill, it had dents in the car and scratches, plus she had to pay for the repair of her Lexus truck. The source said that the gospel singer started acting out of control, cursing, and tried to leave but was blocked in by employees of the dealership.

The Siri-sounding artist spent hours at the dealership trying to raise money and picking up pennies off the ground. Eventually, she raised the $2,000 she didn’t have to pay for the damages of the loaner and the repair of her car.

In the photo below, you can see the vehicle Tiffany was borrowing parked in the dealership garage as she collects her belongings from inside. You will also be able to see the “Johnson Lexus” sticker on the back window as well. 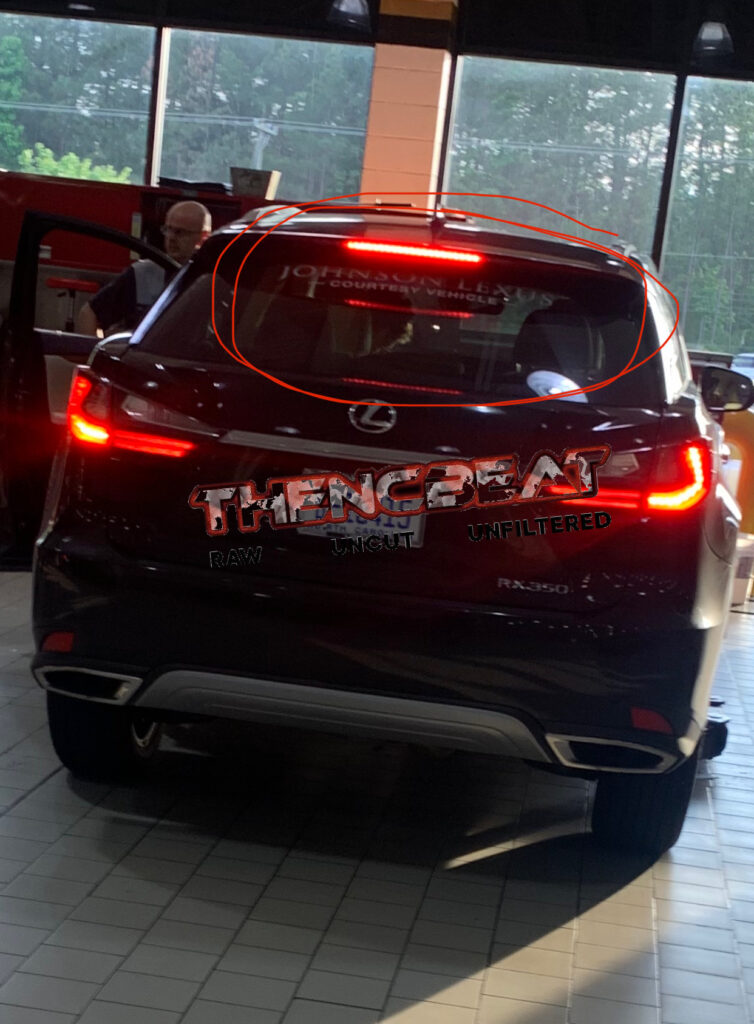 The North Carolina Beat obtained a video of the inside of the loaner vehicle that Tiffany was using, which shows trash everywhere. The source said they also found a pack of cigarettes in the car. And to be honest, we can tell she smoke cigarettes because look at those buttery ass teeth the next time y’all in her face.

The source said that as Tiffany Ain’t Got No Money Andrews left, you can see her back windshield busted with a trash bag and duct tape on it.

LOOK AT THE PHOTO BELOW:

On Tuesday, June 8th, the struggling gospel artist went live on Instagram to talk about a bunch of nothing but did mention that her Lexus truck would get new windows put in.

When Tiffany got inside of her car, you can see the back window busted…

LOOK AT THE PHOTO BELOW: 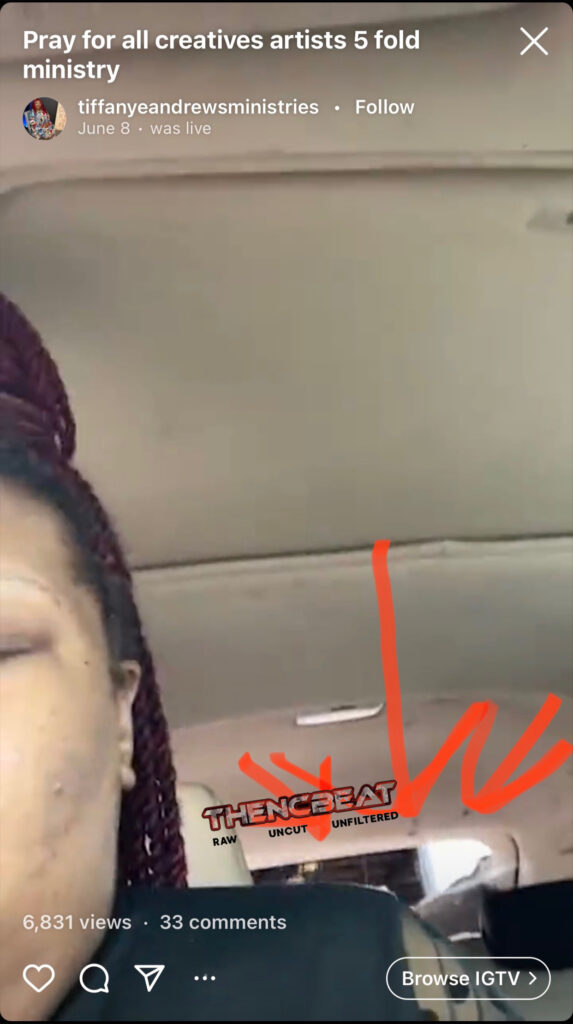 According to the source, just last week, Tiffany called the dealership and said that her Lexus truck was having issues again and she needed a loaner in which the dealership told her that she was banned from using their vehicles.

What is going on with this woman? It seemed like when Tiffany went to Sunday’s Best, she was trying to pull a Leandra Johnson, barefooted, struggling, nowhere to live, broke, need money, etc., but the only difference is, Le’Andria made it.

Everything that Tiffany is going through is probably the consequence of how she treated her daughter because if you want to be honest, all the fame and ministering to everyone else is in vain when your hotel house is in disarray.

What was even funnier to me is that a gospel artist who appeared on national tv and is getting booking engagements is on Instagram asking her four fans to buy her a $42.99 crab boil and don’t have at least $2,000 saved in her bank account. 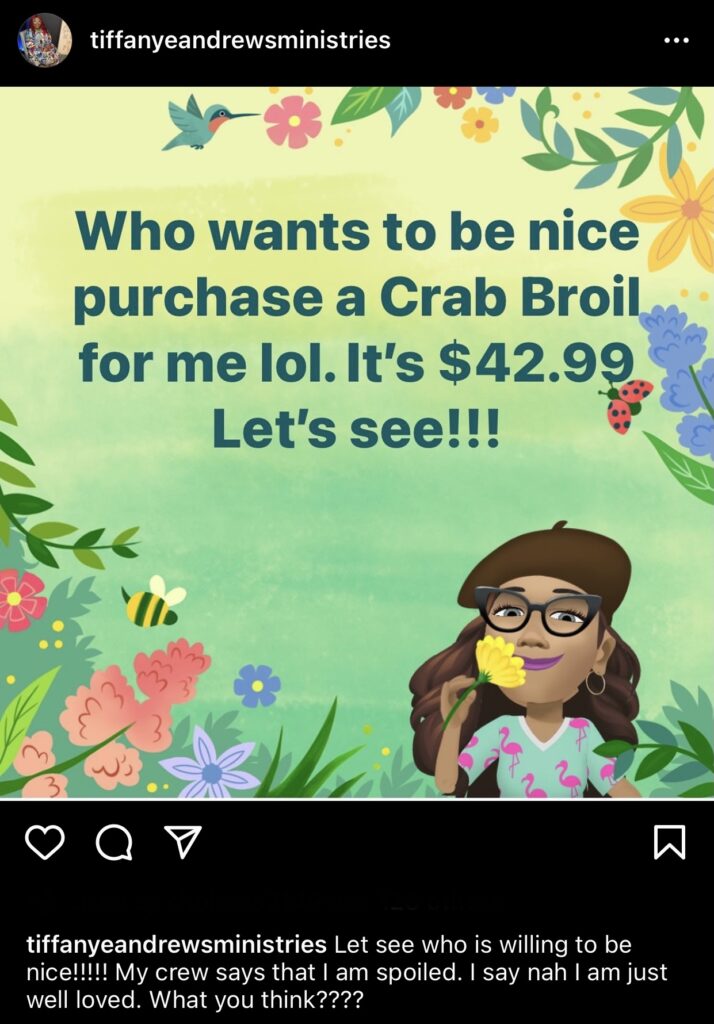 Y’all pray for Tiffany because you can be successful and still broke, and she’s broke.

If you have a story you think the public should know about, send it to newstip@thencbeat.com

5
1
vote
Article Rating
Share
Facebook
Twitter
Pinterest
WhatsApp
Previous articleN.C. man charged with DWI after his wife falls off golf cart and dies, they were coming back from a party
Next articleMan says Raleigh N.C. bishop who supposed to be his spiritual father solicited sex from him

😂😂 not eating peanuts for dinner. Yo Gerald you stupiddddddddd and damn I remember watching her. She had to many runs for me.

Gerald, my wife Sarah and I love you. You keep it raw and real and always having us laughing at the way you right the facts. Keep up the good work bud.

I love this page already. Reminds me of William McCray and how he dragsssss for filth 💙💙💙