Gerald Jacksonhttps://www.thencbeat.com
Hi, my name is Gerald Jackson and I am 24-years-old. I was born and raised in Troy, Alabama. I currently reside in North Carolina. I am a Journalist, Influencer, Content Creator, and a Man of Faith! I have been blogging for 4 years and I love it! I don't shy away from the truth, always speak my mind, and before I take anything back, I'll add more to it. Follow me on my social media below to keep up with my personal life. LOL!
FacebookTweetPinEmailPrintLinkedInShares93

In an audio obtained by The North Carolina Beat, a Neo-Confederate group who was counter-protesting an “I Am Change” rally in Graham, North Carolina this past weekend says police gave them a heads up before they teargassed peaceful protesters.

The “I Am Change” rally held Saturday, October 31, was to march to the voting polls so protesters could cast their ballots on the last day of North Carolina’s early voting. However, before protesters could get to the polls, they were intimidated and suppressed by police.

Graham Police Department and Alamance County Sheriff’s Department violently arrested and pepper-sprayed those in attendance, including children as young as five-years-old.

Co-Organizer, Reverend Greg Drumwright said the event was legally permitted, including a police escort. But it was when protesters were headed to Alamance County courthouse when they stopped for a brief moment before police became aggressive with them.

Graham Police and Alamance Sheriff’s Department interrupted the event and told the crowd they had to leave because they were blocking the roadway and causing traffic issues. police said they gave protesters five minutes to clear out, but witnesses said police let teargas and pepper spray out on them before they could move.

The North Carolina Beat became aware of a live stream of Neo-Confederates telling their audience that police “literally” moved them before teargassing and pepper-spraying protesters.

In the recording, one man could be heard saying, “The cops literally moved us. Now, we know why. So, when they went off and used that tear gas, it wouldn’t get none of us.”

LISTEN TO THE AUDIO AND VIDEO RECORDING BELOW:

On Tuesday, November 3, another protest to the polls will be held in Graham, North Carolina at 3:00 p.m. starting at Wayman’s Chapel AME. 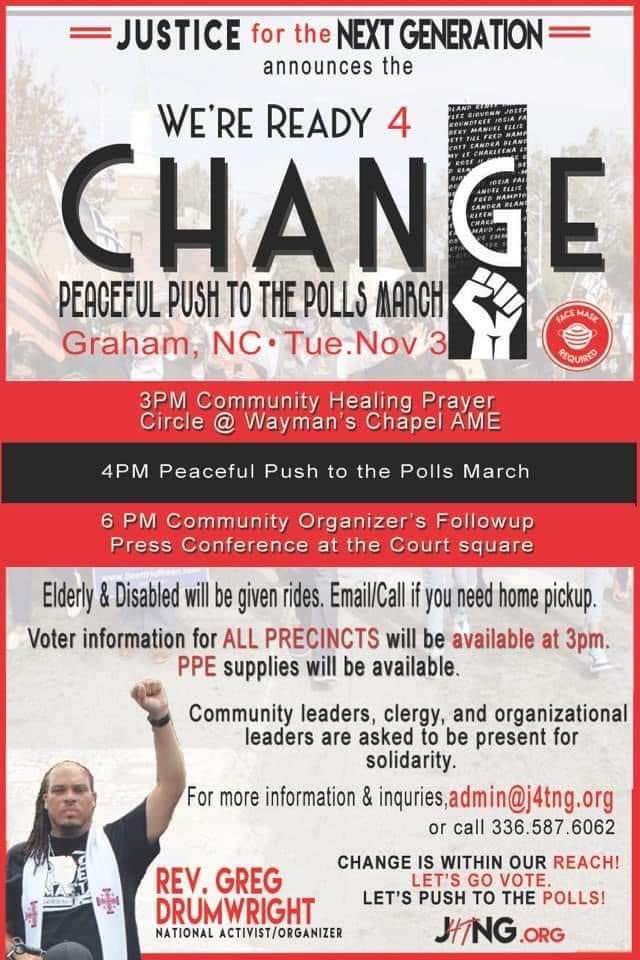 Perry Smith, an Ayden, North Carolina pastor, is accused of using his secret gay lifestyle to make passes at the owner of a marketing firm...
Read more

The saying "Everything is going down BUT the word of God," is true because, at Crown Ministries in Raleigh, North Carolina, baby EVERYTHING is...
Read more
0 0 vote
Article Rating