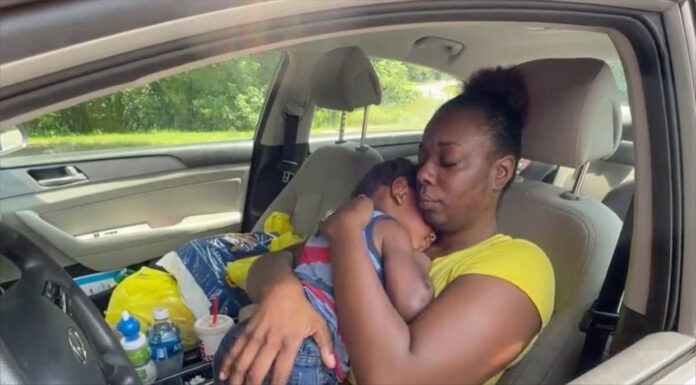 A mother who only wanted to put a roof over her two children’s heads is getting overwhelming support from her community.

Angela Thrower, a mother of two, lived in her car with her two children for weeks. She told local news outlets that she continuously reached out to the Homeless Crisis Lines to no avail and has not been able to get help. Although she has been placed on some waiting lists for some places she applied for, she says there hasn’t been any movement.

I wanna provide a home for my kids. That’s all that I want. I just want one chance, Thrower said.

Seven years ago, Thrower said she was convicted of embezzlement, a poor decision she made. She believes that her conviction is the reason it has been so hard for her to find housing. However, Thrower said her kids should not have to suffer because of her mistake.

I feel like my kids shouldn’t have to suffer because of a mistake that I made, she said.

Thrower said she had called every community line, resource line, and line you can think of, and still hasn’t had any luck.

I shouldn’t have to be sitting here, crying, stressing, and figuring things out when there’s a whole resource line, she said. They’re telling me I’m not a priority. What makes me a priority?

After Thrower’s story was aired on a Richmond, Va news outlet (WRIC), she told the station that over 40 people had reached out and wanted to know how they could help. Now, dozens, if not hundreds, are asking how they can help Thrower.

According to the news outlet, residents have offered to pay Throwers rent, buy nights at a hotel, provide children services, and even offered to furnish her home when she has one.

Thrower said she had been overwhelmed with joy by the love and support. She said she had to start a GoFundMe because of the hundreds of people who wanted to donate.

Thrower will be staying at an apartment rent-free for a few weeks until she finds a home, which numerous organizations are helping her do.