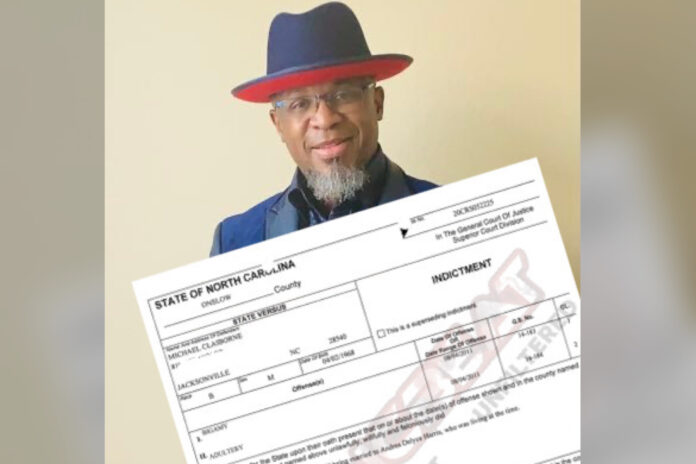 Word down at the courthouse, a now well-known whoring preacher has been indicted by a North Carolina grand jury for Bigamy and committing Adultery, which Adultery is a violation of one of God’s commandments, “thou shall not commit adultery.”

He goes by many titles, calling himself a “Pastor” but has no church, an “Apostle,” but no one knows who ordained him, a “Prophet,” and I’m still waiting on my prophecy five years later, and now he’s begging to become a “Bishop,” but his name is Michael Claiborne.

On May 6, 2020, Michael Claiborne of PMC Ministries was arrested and charged with Felony Bigamy and Felony Adultery by the Onslow County Sheriff’s Department in Jacksonville, North Carolina.

Warrants say that Michael married Lisa Blake Claiborne on August 08, 2011, while still married to Andrea Delyce Harris, who was living in Philadelphia, Pennsylvania at the time. Last year, when The North Carolina Beat spoke to Harris, she told us that she divorced Michael but did not produce documents to substantiate her claims. However, after further investigation, a source said that Harris divorced Michael in 2013, and we confirmed with the courts.

According to court documents, Michael was indicted by a grand jury on the above charges on May 04, 2021, in Jacksonville, North Carolina.

A man who was once a traveling pimp disguised as an evangelist is now a correctional officer at Pender County Adult Corrections in Burgaw, North Carolina, and a uber eats and door dash food driver. Only the Lord himself can drag a lying lowdown dog from the pulpit to a low place like that.

Ever since the true men and women of God found out about how lowdown Michael is, he has been sitting on Clubhouse with his no better than him friend, Bishop Greg Davis, subliminally bashing Pastor Lisa talking about how horrible his marriage was with her. But what he should have been telling his brainwashed viewers is that it was Pastor Lisa who gave him a roof over his head, put money in his pockets, suits, and clothes on his back, shoes on his feet, a car to drive, funded a fashion week known as Jacksonville Fashion Week, and paid over $8,000 to get him out of jail because he couldn’t pay his child support for all the kids from all the women he had one night stands with.

You have to be no good to be a so-called man of God, and your baby mamas putting you on child support.

It looks like Michael is about to go from Clubhouse to the Jailhouse, from steaks to Debbie cakes, and from a top to a bottom.

His new court dates have not yet been updated.